Friday night I set everything out for race day.  I pinned my bib on my shirt, filled my water bottle…etc.  I knew we would have to get up early and be there by 7am, (even though the paper I got at the expo said be there by 6am).  Well we got out the door by 6:10…already that should have been a warning for what was to follow.

We were smoothly going on the freeway…GPS said we were going to get there at 6:45…great!  I was going to get there early, meet my friends Veronica and Tiffany.  Meet up with Melissa and Jennifer (virtual workout buddies :-)).    Well then we were getting closer and closer to our exit…#47 to Fair Park.  We passed exit 46 and OMG….stand still traffic!  Not only was I freaking out, but I was wondering if I should run solo from now on.  I mean this is just too stressful!  There goes my all or nothing attitude again, but I honestly thought to myself, “From now on I run alone, that way no one will wait for me, I won’t feel like i ‘owe’ anyone anything and I can run for ‘me’ again.”

what we faced for 45 minutes! 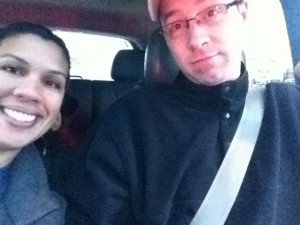 Finally at 8:00 I made it to Fair Park.  Erik zipped the car into a parking spot, I kissed them all good bye and started jogging/running to the porta potties.  That is a MUST before any race or else it’ll be an uncomfortable run.   I followed the group of people who were casually walking…I mean COME ON PEOPLE!  Was I the only one who was freakin out just a little?  Finally I saw the potties, there were at least 100 of them and at least 500 people lined up.  So I picked a line and there I stood, jumping around nervously and stared at my watch…8:05…there were 3 people in front of me and the race was starting in 5 minutes.  Well a potty opened and those people were not paying attention or were too slow, so I took my opportunity, ran in, yes, yes I did.

I remembered my hand sanitizer, got out of the porta potty and ran to my corral…I followed the signs, corrals K-N (we were meeting in Corral L).  Another line…OMG “Ain’t nobody got time for that!”  So as we slowly make our way in like cattle into our corral, the volunteer “gate keeper” sees that I’m actually in corral J according to my race bib.  She tried to steer me away, “Corral J is over there.”  “I know but I’m meeting my friends here and they are waiting for me.”  I don’t know if she saw the determination in my eyes, was scared because she knew I could take her down if she was going to make me wait in another line, or simply didn’t care, point was she let me through.  I found my way cozy in the middle back and stood on my tippy toes, looking to see if I could see Tiffany or Veronica who are pretty short and I’m not a giant either.  Then all of the sudden I felt someone grab my hand, “Yay! it was Tiffany!!!”  Then she said she saw Erik and Erik pointed her in the direction where I was standing.  How he found me I don’t know…there were like a million people there.  So we made our way…”excuse me, sorry, excuse me, excuse me, sorry…”  Woo hoo and there were were Veronica in her cute pig tails, hat and new hot pink running shoes. Tiffany in her shorts (brrr it was cold) and her long sleeve running top, which she bought that morning since she wore a tank top to the race thinking it’d be like the weather forecast predicted…gotta love Texas!  We were ready and I was in my happy place.

“OK 15Kers ARE YOU READY!!!”  Yeah I’ve been ready since 4:30!  Finally the sound for us to go and “beep, beep, beep” as the running watches were started and we were off.  As with any race it is always slow at the beginning, you have to go around people and we wanted to maintain a conservative start, but oooh how tempting it was to run fast and fill in the gaps between us and other racers.  We had a plan, we’d run the first 4 miles and then walk a minute and every mile after that.  We planned to have a faster pace than during the half marathon 2 weeks prior since it was “only 9 miles.”  I was feeling good throughout.  And at the start I felt great, I was moving and was feeling like I had good form which in turn made me more confident.  We continued running, and oooh there was a nice and steady incline and the first hill.  Alright whatever a hill no biggie, but then we saw another hill up ahead, “are you kidding me?”  I asked Tiffany, “Do you remember these hills last year?”  She ran this race last year I didn’t.  “No” she said.  There were like 5 or 6 I remember and they were rolling hills.  We couldn’t catch a break!

We got to mile 4 there was a water station and we walked through it.  We started running again and there was another hill and this time the wind, omg the wind picked up and was blowing against us!  BUT our pace did not decrease.  Yeah we have gotten tougher, “Thank you marathon training.”

As we ran through I noticed the people that lived in the neighborhood out on their front lawns in chairs and blankets cheering us on.  How cool is that?  I envied them all cozy in the blankets and camping chairs drinking coffee, tea, or whatever hot drink in their mugs.  I waved to them as I ran past.  Dallas PD was out there keeping us safe and we thanked them as we passed them by.  There were a whole of volunteers, cheering for us and providing water and Gatorade.  There was one lady cheering us on as we were nearing the latter portion of the race and she said, “You guys are awesome!  You got off your asses to run this morning!”  Or something like that.

We passed mile marker 8 and picked up the pace.  I checked my watch and we were running 8:15 and then 7:30 woop woop!  The wind was picking up and we continued.  Then we could see the finish.  I heard names being called out and thought, “People that registered early must get their names called.”  Then I heard “Idalie” “Tiffany.”  What!  Hell yeah it was us!  PR #2 for 2013 1:26 minutes, Avg pace 9:15 Felt awesome.

We stretched at the finish and waited for Veronica.  She told us at the beginning, “See you at the finish.”  We didn’t wait long and there she was!  We saw the bright pink shoes, she got a PR as well.  Yay Us!  We made our way out and found Erik and the boys.  We went over to get our chocolate…Mmmm  that is what makes it worth it.  Hot chocolate, marshmallow, fondue, a banana…so worth it!  Justin said, “I’m going to be a runner.”  He was disappointed the chocolate was only for runners.  We shared.  🙂  Erik is such a trooper, he woke up early on a Saturday, made coffee, drove to the Dallas in horrendous traffic, and then took me to lunch, had to give him a shout out.  🙂