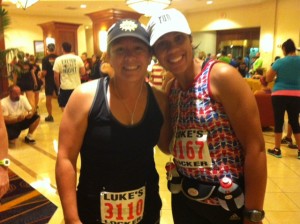 The much anticipated Wounded Warrior half marathon was Sunday June 9th.  I had made arrangements to stay with my friend Melissa and the rest of her strider crew from Waco at the Marriot in Dallas, the host hotel for the race.  It was the best thing I had ever done in my history of race events.  For one thing we were right in front of the start and the finish, so no worries for parking on race day.  Secondly, there was a thunderstorm on race day morning so needless to say, being at the hotel was a blessing.  As the race got delayed, I was able to go back and forth to my room, make adjustments to my race uniform, use the bathroom…etc.  At one point we heard the race was delayed again, to 8:15 start (from 6:45) and we went back to our room.  I literally plopped down on the bed, turned off the lamp, and closed my eyes.  I told Melissa, “I’m taking a nap!”  She was like, “What?!” and set the alarm, that girl was determined not to allow me to sleep through the race, which at that point I was so close to doing.  When we went back down stairs to “start”, I decided to leave my phone in the room along with my ear buds, which was the best decision.  Too many gadgets complicates things for me.  haha I remember when I started running events and needed my ipod and could not run without it.  Now I enjoy the mental clarity I get.  There are times I have my music or audio book on.  I remember listening to running pod casts during my long training runs for my February marathon, which helped me get through the tough ones.  So before we headed back down, I left the phone behind, put my fuel belt back on and immediately felt light and free.

Finally we got out there, it was raining hard but not lightening anymore.  I imagined the pre race festivities got canceled because it was kind of a sad start but considering the circumstances…at least the whole thing didn’t get canceled.  We got in our corral and slowly made our way to the start, and here we go, totally running in the rain, I remember feeling chilly in June!  I avoided puddles to keep my feet dry and did pretty good for about a mile!  Melissa, Jen and I stayed together, for about 3-4 miles.  I got in my groove at about then.  It’s typical for me to “warm up” and get in the zone for the first 4 miles.

I stopped at the aid station at 4.5 miles grabbed a cup of cold water, took a swig, and continued running.  I had my fuel belt on with some electrolyte drink, but cold water was what I needed.  I continued running, just happy, I think I was grinning.  Like the Tamahura, The Running People, Christopher Douglas writes about in the book, Born to Run.   Thanking police officers along the way was pretty cool, Irving PD stood out there in the rain and dealt with the delays.  They still protected us from the hazards along the way, (i.e. cars).

I think a little after mile 4 we got detoured away from the path on to this grassy muddy hill to get back paved trail/path which was across the freeway.  I remember going down that wet muddy hill thinking, “Don’t slip and fall, don’t slip and fall.”  I didn’t and was on the paved path in no time.  It cracked me up when I heard runners mumble, “I didn’t know this was a tough mudder.”  Um…ok this was like a tough mudder lite.  The rain stopped but the trees sprinkled drops of water along the way. We ran under this canopy of trees that was very pretty, and wet!

I think it was at the loop turn around that there was high water across our path, like a river passing, we needed a little bridge or something.   Most of the people walked through it.  I was running up to it and the runner next to me continued running and so did I, we looked at each other and giggled.  🙂  We splish sploshed through the water and it was kinda fun and at the same time gave me this feeling of being a little hard core.  We ran up a muddy hill (the same one we ran down I think) and I felt my foot slide under me in the mud, I caught myself but imagined rolling down.  During that portion a lady noticed my shoes,  I wear Merrel Pace Gloves.  I love them and I think if I would have had bulky running shoes I would have face planted on the first muddy hill.  So the lady and I chit chatted about minimal running shoes and I shared my experience with her, the price, etc.  She thanked me for sharing and said she would try them out.  She wished me luck, as did I to her, and on I went.

I ran up to mile 9.5 felt my form getting sloppy so I stopped at the water station and walked through it.  It was a nice walk I thanked the volunteers and continued on.  I ran to mile 11.5 stopped for water and noticed a man who got his water and had one arm and one prosthetic.  I threw my cup away and was ready to start running, but noticed he continued walking. I turned to him and said, “Come on let’s go!”  So he smiled, and started running next to me.  “Let’s finish this.” We ran together for about a mile.  I told him I’d never run this race before, he said he ran it last year and it was really hot…etc.  We turned a corner, thanked more Irving PD, and continued on.  He told me he didn’t want to hold me back and I told him we were keeping a good pace.  The companionship was nice we continued the small talk for a little while before he slowed down.  I told him good luck and continued on.

I got to mile 12 and picked up the pace.  I saw the 2:20 pacer going the opposite direction which made me happy since that meant I was at least 5-10 minutes ahead.  I crossed the finish feeling great.  My blisters didn’t  flare up, I was relaxed, didn’t feel exhausted, and felt so satisfied.  I didn’t PR in fact I was 5 minutes slower than my last half, but it didn’t matter.  In fact when I first signed up my goal was 2 hours for this half.  I was imagining that for about 3 weeks, but then I regrouped, realized that it didn’t matter, and I just wanted to run a relaxed stress free race.  Staying at the hotel, meeting new friends, and treating this as a training run really helped.  The thunderstorm on the morning of the race was another determining factor, I was not going to push for a PR and risk falling on my face! I just wanted to enjoy myself.  That mental preparation helped me.  I endured much more than I thought I could, I practically ran the whole thing!  Next year I’m looking forward to running this race again and staying in the hotel with friends of course!  🙂

I read in one of my running books (one of many) that a slow marathon gives you that same sense of accomplishment as a PR.  I felt that this time.  Next on the radar is a virtual half marathon in July and full marathon training starting July 7th.  So far I think FW marathon is going to be it,  maybe Dallas,  and most likely Cow Town again.  We’ll see!