We flew into Portland, OR on Saturday August 10th and since we had our plane tickets, I was already planning on running and hiking.  I waited with great anticipation and as I was packing my bags on Friday afternoon, I began with my running/hiking clothes.  I packed my tech shirts, running shorts, some running tights, sports bras, and my socks.  Then I had to think about what I was going to wear the rest of the time I wasn’t running, but who cares, I was going to get to exerpierence some hiking and running on trails in the NorthWest.  I was leaving 100 degree humid weather in Texas to enjoy fresh cool humidity free runs.

Sunday August 11th, Julie my best friend and I hiked on Angels Rest.  It was a steep climp for 2.4 miles up.  The view was really beautiful and it took us an hour.  The way back down was down hill with some rocks and some parts I went down on my butt.  We completed a total of 4.8 miles in 2 hours.  I was very sore the next day and my calves were really feeling it.

Monday August 12th we made our way up to Chelan, Wa which was a 7 hour drive give or take.  A forced rest day and a much needed one since I was still very sore.  Tuesday we got on the boat at Field’s Point and made our way up to Stehekin.  It was a nice boat ride and nice to get up to the valley at noon.  We had the whole day to explore a little, get settled in and nap.

Wednesday August 13th I decided to go on my run.  When we woke up in the temps were in the high 50’s, burr it was nice and chilly.  I got into my running shorts and my tech shirt, ate my breakfast and then slowly made my way out.  It was nice not to have to run to beat the heat.  I took my time and at about 9 I began.  I went out on this gravel road and could hear the rushing water in creeks nearby.  Eventually I turned around and made my way up the other way, still all gravel until I was finally on paved road.  I passed some areas and stopped to take pictures.  Some of the run was uphill and I felt it in my calves.  I passed over two little bridges with running water underneath and it was so serene.  I turned around after 2 miles (at that point my garmin totaled my run at 5 miles).  On the way back I took some more pictures, including at the former Stehekin school.  It is now a cute little historical building, (The current school is a bigger building and further up the road).    I finally made it back to my in law’s cabin, total run was 7.4 miles.  It was neat to run here and I can’t wait to do it again.

After I got back, Erik the boys and I went up to Rainbow Falls for a short little hike up to the falls, took some pictures and walked about 1.5 miles to the bakery where we had a yummy lunch and of course pastries!  Tomorrow we plan on hiking at Rainbow Loop, it’s a 5 mile hike with some elevation.

The next morning Erik and I hiked 5 miles just the two of us.  It was impressive to see Erik going along and not huffing and puffing.  🙂  We hiked along by Rainbow Falls and continued up the mountain.  It was so beautiful.  We passed by a Boy Scout troop who took our picture. 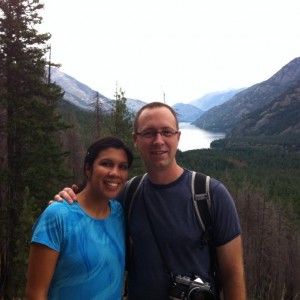 On August 16th, our last day in Stehekin, I decided I’d run from the cabin to the landing and back, approximately 11 miles total.  I brought 5 dollars with me to stop at the bakery too.  🙂  I began my run around 9:45am it was cool and super nice.  I ran the 5.2 miles to the landing and turned around to head to the bakery.  I stopped at the bakery after 2 miles and there was a crowd and it was warm in there (much cooler outside).  So I decided to fill up a cup of water from the cooler and head back out.  I continued running the rest of the way, 3 miles, to the cabin.  Once I got back the family was relaxing and we decided to go on one last hike.  A short 2.5 mile hike.  It was lovely.  Mama J, Isaac, and I headed back the long way while Erik, David, Justin, and Tinkerbell went back the short way.  Of course we headed to the bakery for “recovery” snacks.  I think that was my favorite part, after excursions we’d go to the bakery.  It was an everyday thing and it was so good. 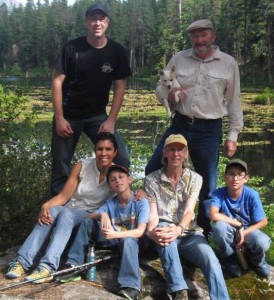 After we left Stehekin we drove South to Long Beach, Washington.  It was another great time.  We were there with Erik’s Dad, Jan, Jessica, Blake, and Amber.  I had the opportunity to go on short runs  on the road but it was nice weather and the beach was nearby.  It was a nice relaxing time taking walks and walking along the strip.  It was a nice way to revitalize myself and get back to the running.  I was feeling burnt out and tired and having the change of scenery, cooler weather, and other activities  (hiking and walking) were just what I needed.  🙂