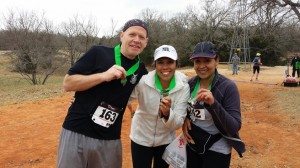 Tim, me, and Mildred

On March 22nd I set out to run a half marathon on the trails in Texas.  It was my first trail race so I decided to do “just the half.”  There was a Full Marathon and a 50 mile ultra at this event.  Not only was I running, but my marathon running partner, Liz (not pictured, she left right after we finished), Detective Tim Boren  from the Irving PD, and my supervisor Mildred were also running it.  This was going to be her first half marathon ever and she was doing it on the trails!

Early in the morning we packed the family in the car (my support/pit crew) and drove about an hour North to Decatur where the event was held.  The area was pretty and there were cows and horses grazing.  In fact there was a cow at the entrance gate just standing there as cars pulled in.  It was such a sight for us “city slickers” to see just a random cow standing there, “directing traffic.”  It was windy and chilly that day which made for a nice morning.

We lined up to start and I noticed how narrow the path was so we pretty much had to go in single file, unlike a road race that there are mobs of people spread out to 3 and 4.  Liz and I stayed together and talked and ran, hopped, leaped, climbed…etc.  Towards the beginning of the race probably 2-3 miles in, a girl ran by us and tripped and fell.  Liz and I helped her up and continued on our way.  At one point I tripped over a twig, a rock, or something and my arms went flailing and I leaped two steps but I stayed on my feet.  I call that my balancing skills learned in Jiu Jitsu class!  Liz was in front of me and she heard the fiasco but didn’t actually see my “gracefulness.” She was laughing though!

We headed up to about mile 5 (miles on the trail seem to last forever and there were no mile markers until the last 4 miles), and there was this girl standing and looking lost, with a phone in her hand that had no signal (We were in the middle of nowhere).  She asked if we knew where the next aid station is since she was lost and had back tracked around that same path we were on twice.  We ran with her until the next aid station at mile 9 where they directed her and she was on her way.  She was very grateful that we stayed with her and kept her company.  Liz and I are chatters so I guess it was entertaining for her since she was running her first 50 mile ultra and was probably not going to make the cutoff to finish it.

It was probably around mile 10 we saw a dead armadillo in our path and literally had to leap over it.  Liz about lost it, she had never seen an armadillo, let alone a dead one in her path.  It was a sight to see though.  We also saw a few dead birds we had to be careful not to step on.  Another cool thing for us was running up to gates that said needed to be kept closed because there were cows grazing.  So we ran up to a gate, opened it, then closed it back up and we were on our way. There were so many things to see and do on the trail that we actually lost track of time and our mileage…it went by so fast!

We continued on and then we saw race photographers and mile markers, we knew we were getting closer to the end.  I got my second wind as I usually do and went ahead a little ways.  The trees, the terrain, and the people were all so wonderful I had to take it all in.  Trail running is not about speeding past everything.  In road racing there is a competitive vibe among the participants, friendly but competitive.  In trail racing there is a little of that but it is also about the experience and for me, about truly enjoying the run.