November 10th 2013 was the date of my 2nd marathon. During my training I didn’t follow a plan and simply ran. I wrote out an extensive plan and followed it for a couple weeks but was feeling burnnout. Without having registered for the marathon, it was like I wasnt feeling that committed.  I began talking to my friend Liz who was also running it and she was keeping up with  her runs and her miles.  It inspired me to get back on track. We met up for a 20 mile run. I’d run 17 by myself a week before and it wasn’t fun. We met at Trinity Trails at 5:45 on a Sunday morning. The day before I met with Allison to run 8. She was training fot her first half marathon.  The 20 mile run turned into a 22 miler since my Garmin mis calculated our turnaround, so we walked those 2 extra miles.  🙂 A couple weeks later we ran 23 miles before we began our taper. I felt confident. It was a different feeling going into this marathon than the last. I wasn’t burntout, stressed, or nervous. Also, I wasn’t that concerned with pace even though I had a goal in mind. Liz and I began the race and crossed the start line right away. We were runnung along comfortably chatting and a guy litlerally running barefoot passed us. His green shirt said vegan in bright yellow letters and it was interesting to watch him go along with quick steps in a tap, tap, tap, tap, tap cadence. We ran the first 4 miles in a comfortable pace. We took a walk break for 1 minute then continued to run for 3 minutes befire our 1 minute walk break. We went along like that for the next 9 miles.

At about mile 11 Liz had to stop at the porta potty…no biggie, I waited for her, it felt like forever!  Especially when other runners were condescendingly telling me to keep going, that  “You got this!”  OMG I was just waiting for my friend!  Doesn’t everyone do that?  Anyway, we were on our way.  Wow there it was the 13.1 turn around!  I was so happy.  Just 13.1 more milees to go! 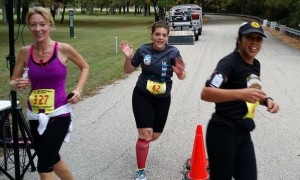 Liz waved to the camera, and we got photo bombed!

We were feeling good at this point.  We decided to run a full mile before taking our 1 minute breaks from this point on.  It was awesome to pass people that had passed us just miles before.  At around mile 16-17 Liz was recognizing the people that had passed us that were going the opposite direction as us!  They still were heading towards the turn around, which we had already passed.  About mile 18 my hips and ankles were aching.  It was at about mile 24 and 2 potty breaks later (Liz needs Depends I swear!), that we decided to go back to 3:1 intervals.  My muscles were tired and Liz’s foot was hurting from a past injury.  When we went to mile 25 I could hear the crowd of people and I saw the ball park, which is where we started.  I knew we were so close.  I looked up and saw my mom over the top of a hill.  I was so happy and surprised, I waved frantically.  “There’s my mom!”  “Don’t stop running!”  Liz was struggling, I was too, but I got a second wind.  I sped up and Liz just continued on despite her pain and wanting to walk.  I told her to just keep going we were almost there!  She said, “I’ll just cry instead!”  That cracked me up!  We had about 300 yards left to go and we saw the sweet finish.  Crossing the finish line was awesome!  We did it!  26.2 miles.  Liz’s first marathon and my 2nd.  🙂 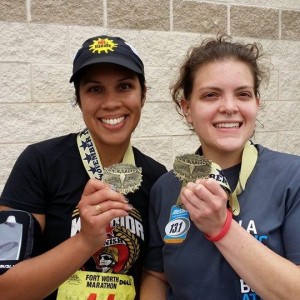